Hebeler has been delivering engineered mechanical solutions, from modular systems to custom high alloy components, for companies large and small, in diverse industries from power generation and chemicals to food a pharmaceuticals for nearly 100 years.  Through several targeted acquisitions Hebeler has expanded the solution offerings and manufacturing capabilities for customers.

Buflovak has its origins from the merger of two small manufacturing companies in Buffalo, New York USA over 100 years ago. In 1902 the David Bell Engineering Works and The Buffalo Foundry Company merged and created the Buffalo Foundry and Machine Company. The company evolved into a specialist in the design and manufacture of double drum dryers, vacuum dryers, evaporators, vacuum pumps, condensers, and receivers. Several years after the merger, the “Buflovak” trade name was coined to encompass the company’s vacuum process equipment and was an abbreviation for “Buffalo Vacuum Equipment”. 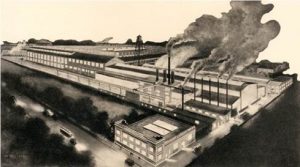 From 1902 the company prospered and went on to pioneer new technologies, patented proprietary equipment and developed pioneering fabrication of high alloy materials. In 1945 the company was acquired by the Blaw Knox Corporation and renamed Blaw Knox Food and Chemical Equipment Division. The “Buflovak” trade name was expanded to encompass a variety of equipment including drum and rotary flakers and dryers, and modular evaporators.

In 2004 the company name was changed to Buflovak, LLC to leverage the name recognition and reputation Buflovak enjoys with our customers.

The Patterson Kelley Company originated in 1880 as a heat transfer equipment manufacturer in Brooklyn, NY. Patterson Kelley Process Equipment division began in 1949 with the development and introduction to the market of the Twin Shell Dry Blending System. Over the next 25 years additional innovations were introduced, including a variety of blenders, dryers and granulators that operated in both batch and continuous modes. In 1974, the Patterson family sold the business to the Harsco Corporation.

In 2010, Buflovak purchased the Patterson Kelley Process Equipment division from Harsco Corporation to expand Buflovak’s process equipment line to incorporate blending and drying of powders. In 2011, the company was re-branded to Buflovak PK to reflect the integration of the two companies into one entity.

In 2019, Howard Marten Process Systems joined the Hebeler group of companies, bringing with them a specialized engineering team focused in the markets of Power Generation, Mining and Oil and Gas.

We have the solution for your process. Contact us

Close Menu
We use cookies on our website to give you the most relevant experience by remembering your preferences and repeat visits. By clicking “Accept”, you consent to the use of ALL the cookies.
Cookie settingsACCEPT
Manage consent

This website uses cookies to improve your experience while you navigate through the website. Out of these, the cookies that are categorized as necessary are stored on your browser as they are essential for the working of basic functionalities of the website. We also use third-party cookies that help us analyze and understand how you use this website. These cookies will be stored in your browser only with your consent. You also have the option to opt-out of these cookies. But opting out of some of these cookies may affect your browsing experience.
Necessary Always Enabled
Necessary cookies are absolutely essential for the website to function properly. These cookies ensure basic functionalities and security features of the website, anonymously.
Functional
Functional cookies help to perform certain functionalities like sharing the content of the website on social media platforms, collect feedbacks, and other third-party features.
Performance
Performance cookies are used to understand and analyze the key performance indexes of the website which helps in delivering a better user experience for the visitors.
Analytics
Analytical cookies are used to understand how visitors interact with the website. These cookies help provide information on metrics the number of visitors, bounce rate, traffic source, etc.
Advertisement
Advertisement cookies are used to provide visitors with relevant ads and marketing campaigns. These cookies track visitors across websites and collect information to provide customized ads.
Others
Other uncategorized cookies are those that are being analyzed and have not been classified into a category as yet.
SAVE & ACCEPT